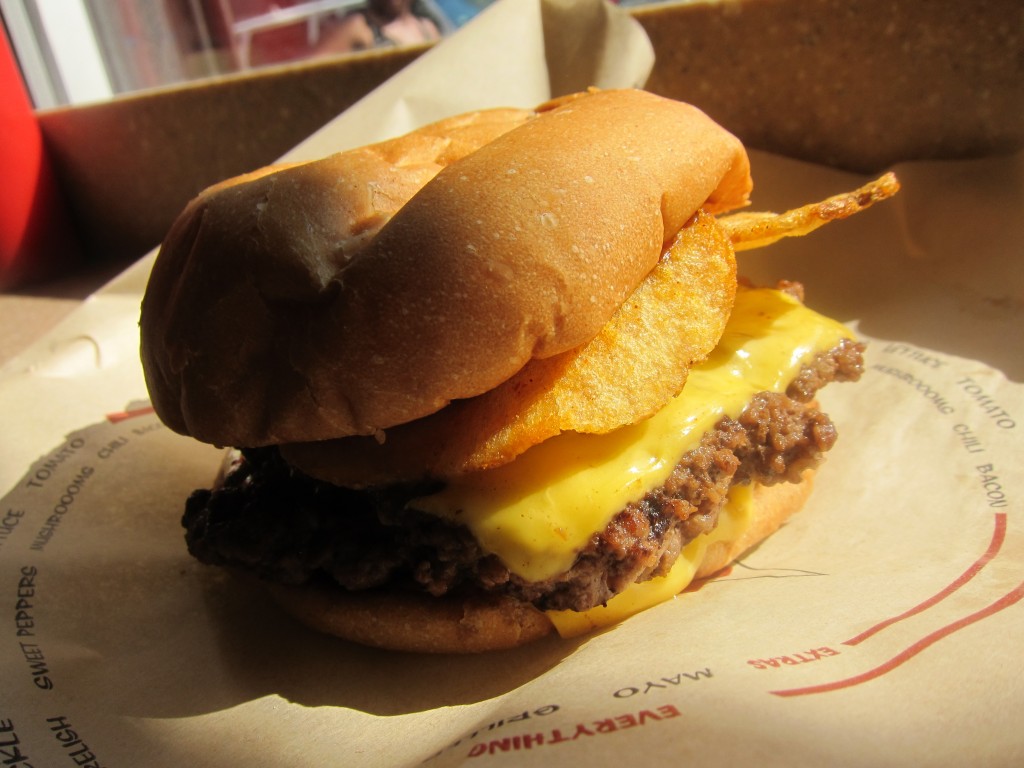 Burgers are my big, decadent cheat.

When I’m too tired to cook and there are no dinner plans on the horizon, my neighborhood Five Guys Burgers is my instant best friend.

And so it was with great excitement that I read about a new burger joint opening near my Brooklyn neighborhood this spring — Jake’s Wayback Burgers, a chain that began as Jake’s Hamburgers in 1991 in Newark, Del., and in 2010 changed its name to brand itself as a throwback to a time before “frozen hockey-puck burgers” or celebrity chefs “selling overpriced burgers for $20 at their upper-crust burger boutiques,” so says its Web site. Now, having had some of these types of burgers — and enjoyed them very much — I was curious to see how a chain that slams other burger purveyors would make its own.

So, on a recent afternoon, we set off to see how this bygone burger would taste …

END_OF_DOCUMENT_TOKEN_TO_BE_REPLACED Well, it’s been exactly one week since I inadvertently went live with this blog by posting something and then forgetting that I’d set it up so a notification would go out on Twitter whenever there was a new post. The next thing I knew, emails from new readers started to come in.

There’s nothing like getting shoved into something when you’re not quite ready — but, a week later, hey, we’re still alive and kicking!

Big thanks to some early supporters: Liberty London Girl, who did a wonderful item on A Tiger in the Kitchen mere moments after we went live. Jewelry designer Wendy Brandes of the sassy Wendy Brandes Jewelry blog, who totally nagged me to start this blog and continues to teach me oodles about blogging. The Asian American Journalists Association, which did an item on my book deal with Hyperion that also linked to this blog.

Eat Me Daily blogged about the book deal as well, following a nice item about it in Women’s Wear Daily.

Here’s to many more weeks of cooking, eating and waxing lyrical about it all. Thanks to all of you — from Sydney to Salem, Oregon — for checking in so far.

And … the navel-gazing moment ends. Santé!

While girls around me wanted to be Nancy Drew or Barbie, the seven-year-old me would have none of that.

Instead, I wanted to be one of The Three Investigators, a group of plucky teenage boys who lived in a fictional Southern California town, solving crimes that flummoxed even awfully smart adults. After voraciously plowing through this American mystery book series, my two first-grade best friends, Jill and Joyce, and I huddled at recess in our French convent school in Singapore, whispering to one another about suspicious happenings we had witnessed, vowing to use our powers of deduction to get to the bottom of things. I don’t recall us ever solving anything — probably because nothing actually needed to be solved. But years later, the desire to get to the bottom of things lives on.

Last year, the Hubbs and I ventured to Coi in San Francisco — New York Times dining critic Frank Bruni had just named it one of the top 10 restaurants in the country that had opened the year before and our expectations were high. (Coi’s chef Daniel Patterson was just nominated for a James Beard award a few weeks ago.)

Although we rolled our eyes a little at the waitress’s instruction to sniff a dot of perfume oil in order to enhance the flavor of a dish, we concurred that it worked, when we put cynicism aside and actually did it. It was also Coi that served up a dish that I still think about regularly and with great longing more than a year after my visit to the restaurant. It was a simple bowl filled with chard and wheatberries, swimming in a brown
butter-parmesan sauce and topped with a slow-cooked farm egg. The sauce was unforgettable, as were the textures — I adored feeling the juxtaposition of the crisp foam with the gooey egg yolk on my tongue. But the dish that truly captured our attention was a plate featuring the tiniest sliver of Mimolette cheese, the smallest sprinkling of greens and a sprig of something that resembled a Barbie-sized bouquet of daisies. The waitress instructed us to take a deep whiff of the miniature bouquet and then sip our wine and eat the cheese. The plant’s honeyed fragrance was meant to enhance the taste of our wine and the sharp Mimolette.

We, and the food-loving friends we were with, became instantly obsessed. We could not stop sniffing the tiny blooms, long after the bite-sized Mimolette had disappeared. And when the blooms we’d been given had, sadly, disintegrated from apparent over-sniffing, we implored our waitress for more.

We begged her to to ask the chef, the kitchen staff, what was this plant exactly? We wanted to buy it, grow it in our homes, fill our office cubicles with tiny honeyed bunches. No one, however, had an answer.

END_OF_DOCUMENT_TOKEN_TO_BE_REPLACED

Last night, I found myself at Cafe Asean in the West Village very openly staring at a woman eating a burger. It wasn’t just any burger — it was the Cheryl Burger, my very first culinary creation to appear on an actual restaurant menu. Who wouldn’t be all excited and weird and googly-eyed at the sight of someone you don’t know actually eating a dish you dreamed up? Palms sweaty, I approached the woman to explain that a) I wasn’t some creep trying to intrude on her dinner–well, I wasn’t a creep without a somewhat valid reason, anyway… b) I’d designed the burger and c) I wanted to know, “What do you think?”

Mouth full, Susan the diner (who just so happens to have a fashion connection — she’s the designer of Skin Lingerie) gave me two thumbs up. And all of a sudden, the months of experimenting with meatball and burger recipes, marinating and pan-frying and then marinating more and grilling — it all suddenly seemed worth it. I felt like the Sally Field of cooking. I was liked! Well … my burger was liked, anyway.

The quest for the Cheryl Burger began at my last Labor Day cookout — after a heady evening of countless sauvignon blancs and burgers that had been steeped for hours in a marinade of hoisin sauce and Asian sesame oil before being thrown on the grill, a sated chef Simpson, owner of Cafe Asean, pronounced, “I’ll tell you what — if you come up with an Asian-style burger that I like, I’ll put it on the menu.”

And the challenge was ON!

The big question of the next few months was: What Asian flavors would work well in a western burger?

Teriyaki sauce? Too pedestrian. Hello, if even Mcdonald’s has done it, it’s done, done and done. I like hoisin — the sweet soybean-based sauce greatly enhances the flavor of beef. But Simpson himself had already done a hoisin burger at Jefferson,
another West Village restaurant he’d owned a few years ago. (Another fashion connection: Jefferson figured prominently in a key “Sex and the City” moment — it’s where Miranda held her wedding reception, when Samantha blurts
out to the girls that she has breast cancer.)

END_OF_DOCUMENT_TOKEN_TO_BE_REPLACED

When I tell people that I’m kicking off a year of ferocious eating and cooking, the question inevitably arises: Well, what’s the most daring thing you’ve tried so far?

Even though I grew up in Southeast Asia — Singapore, to be specific — my extreme food forays have been rather limited. I’ve spent years avoiding offal, even at the best restaurants in New York. (I’ll always love my husband for the time at Per Se when he saved me from my accidental order of calf’s brains by leaning over and quietly suggesting, with a significant amount of urgency in his eyes, that I would *probably* prefer the other entree special.) And, to great eye-rolling by my dining companions, I tend to pick out
the chopped up pig’s tails that sometimes come with hearty prawn noodle soups in
Singapore.

Heck,
I’ve not even sampled chicken feet, the relatively common staple of
Chinese dimsums that my Mum slurps up with great gusto,
filling the table with soft sucking sounds as she deftly juggles the
knobby bones with her tongue so she’s extracting the most meat
possible from each bite. (Forget tying a knot with a cherry stem — this should be the test of how good a kisser you are.)

I do have one extreme food notch on my belt that draws groans and
greenish looks whenever I bring it up, however: Spleen sandwiches.

In the heart of Palermo on the Italian island of Sicily, there’s a little place, Antica Focacceria San Francesco, with a fascinating story of standing up to the mob.
It
also happens to serve a much-lauded version of the local specialty
of spleen sandwiches — sliced cow’s spleen boiled in a hearty
stew, scooped onto a butterflied bun and topped with a generous
sprinkling of grated cacciocavallo, a cheese that’s similar to provolone
that’s ubiquitous in Sicilian dishes. Never mind that before we went, I
wasn’t entirely sure what a spleen
actually did and my husband had to explain it to me. (Even though I’m
of Asian ethnicity, I was never any good at science. My ninth grade physics teacher would be more than happy to vouch for that, I’m sure.)

Before our trip to Sicily in July 2008,
I’d seen an episode of Anthony Bourdain‘s Travel Channel show, “No Reservations,” where he visits Palermo and the mayor of the city takes him to Antica Focacceria San Francesco. I remember thinking, “If it’s good enough for Anthony …” and,
the next thing I know, I’m standing on the street with the Hubbs and a
bunch of friends, passing a spleen sandwich around the circle as we
take mincing bites followed by long, thoughtful pauses.

We knew we’d hit food paydirt because we’d followed a crew of carabinieri (police) into the restaurant, where they’d headed straight for the spleen counter. For 2 Euros (about U.S.$4 at the time), a heaping spleen sandwich for lunch isn’t a bad deal in Palermo, I guess. “It’s
not … baaad,” my chef friend Simpson finally said, offering his usual
response to a dish he’s trying to be diplomatic about. He knows how
much I worship (Saint) Anthony Bourdain and how deep my love for all
things Italy is. (I still have a scarf for Inter Milan, the soccer team
I followed with great passion — for the sport as well as the gorgeous
players — as a teen, pinned up in my girlhood bedroom.)
Which is probably what prompted Simpson to add: “It’s actually quite
flavorful, you know.”

The truth is, my love for the entire Italian soccer squad — years past and present
– could not inspire me to ever eat another spleen sandwich. The earthy,
meaty stew is fantastic — all beef stews should taste that complex.
And the mildly sharp shredded cheese is a lovely touch. But the
mouthfeel of the spleen is what gets you — food should not feel dense, rubbery and somewhat impenetrable,
no matter how flavorful it is.

But maybe that’s just the old Cheryl talking — the one who’s partial to the lobster spring rolls and tubs of caviar that populate New York’s fashionable parties. While I grew up on simple, delicious dishes like curried chili crab and stir-fried beef noodles, I’m far more likely to pick steak frites over wok-fried dumplings for dinner these days.

In the year ahead, however, my plan is to travel, eat and learn at the woks of the many “aunties” in my life — from my actual aunts in Singapore to New York friends like Simpson, who continues to teach me the most basic things about Southeast Asian cooking with massive gobs of patience.

The task ahead isn’t easy. For starters, I will have to stop picking
out those pig’s tails. But if my bravery ever falters, I’ll just think
of Saint Anthony.