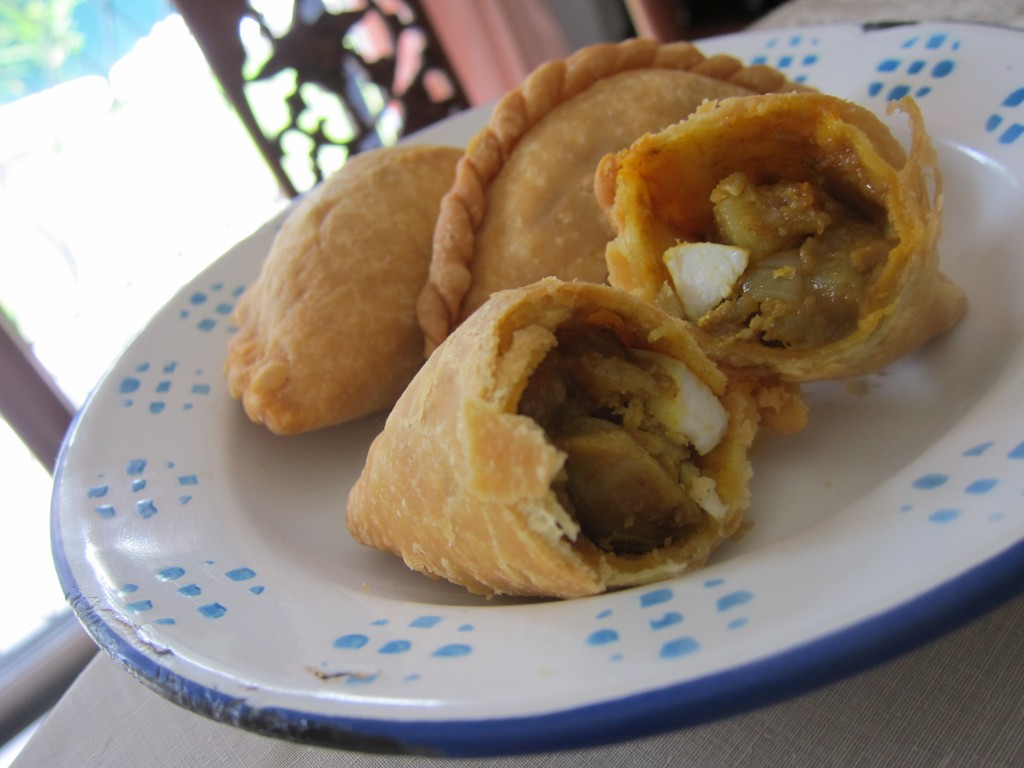 There’s been some chatter on Twitter about curry puffs recently — talk, even, of taking a stab at home-made versions of these deep-fried pastries filled with curried potatoes and hard-boiled egg.

Making these puffs — which are divine, especially if eaten piping hot and freshly fried — has never once crossed my mind. This is due in large part to the fact that they’re ubiquitous in Singapore, where I grew up. At 50 cents Singapore (roughly U.S.$0.40) — about what they cost when I was growing up in the 1980s — these puffs were so inexpensive and easy to buy that not many people thought of creating their own. (I salute @WokStar‘s attempt for our Let’s Lunch date next month.)

Among all the hawker stalls that sell curry puffs in Singapore, however, a few stand out. During a visit to Singapore earlier this year, I had the great fortune of stumbling upon one of them while cruising a hawker center, searching for lunch …

On the second floor of Tanjong Pagar Plaza, in the southern part of Singapore, is a hawker center — or open-air food court — that is relatively pedestrian in most of its offerings. Nestled among the mediocrity, however, was a gem of a place: a branch of Rolina Curry Puffs, a small, family-operated chain of stalls that has been making the savory pastries since the mom and pop behind the business began selling them from the back of a motorbike in the 1950s. 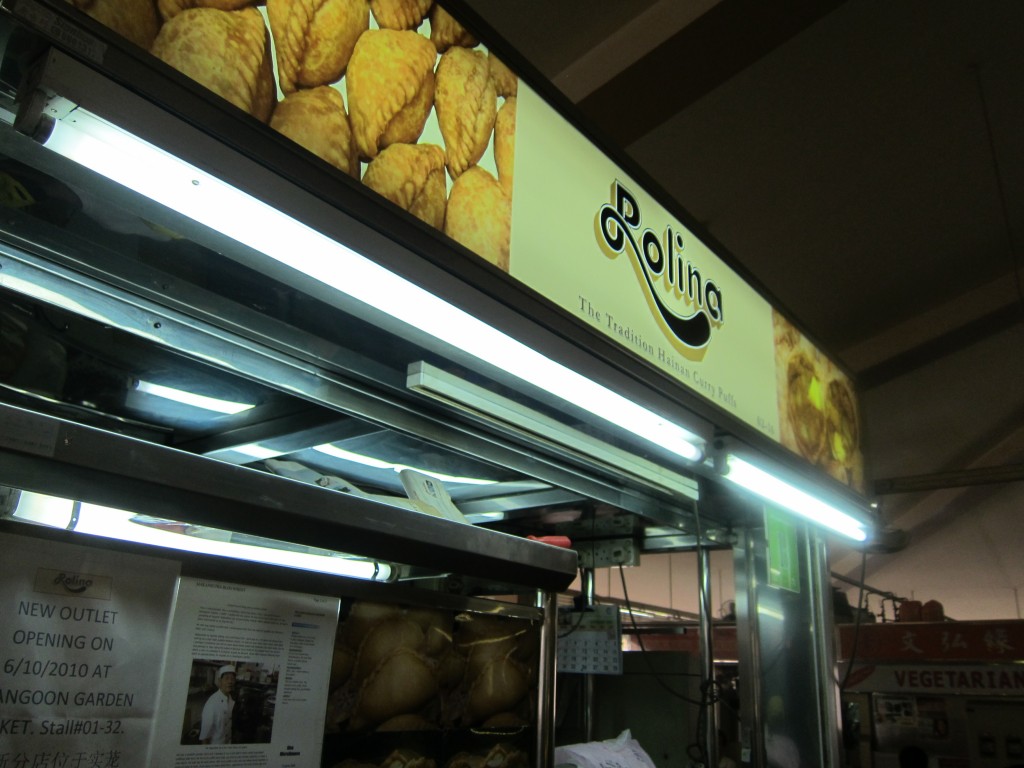 Mr. and Mrs. Tham, the founders of Rolina, learned how to make these puffs from a Hainanese sailor who was a great cook, so the story goes. The couple obviously can’t man all its stalls these days, so it was one of their sons — who insisted we also just call him Mr. Tham —whom we chanced upon in Tanjong Pagar that day. He and his small team of helpers very graciously agreed to show us how it all goes down.

First, you take a small, rolled-out circle of dough … 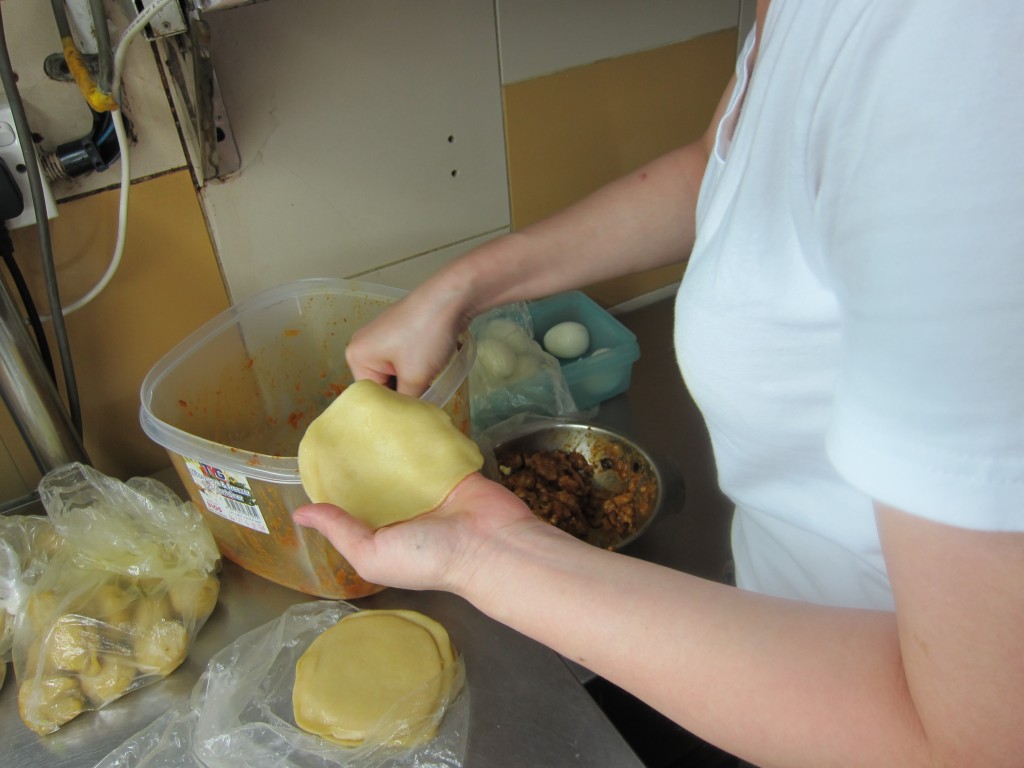 … and fill it with a few tablespoons of diced, curried potatoes and top it with a slice of hard-boiled egg. 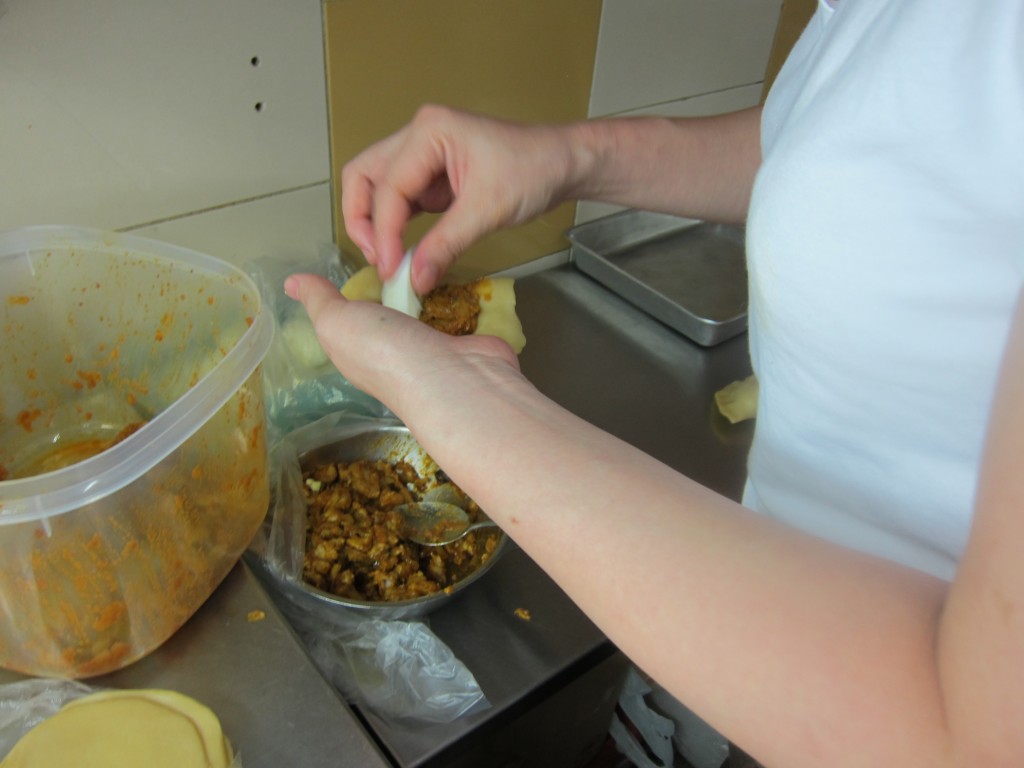 Then, you fold over the dough and let the decorative crimping begin. 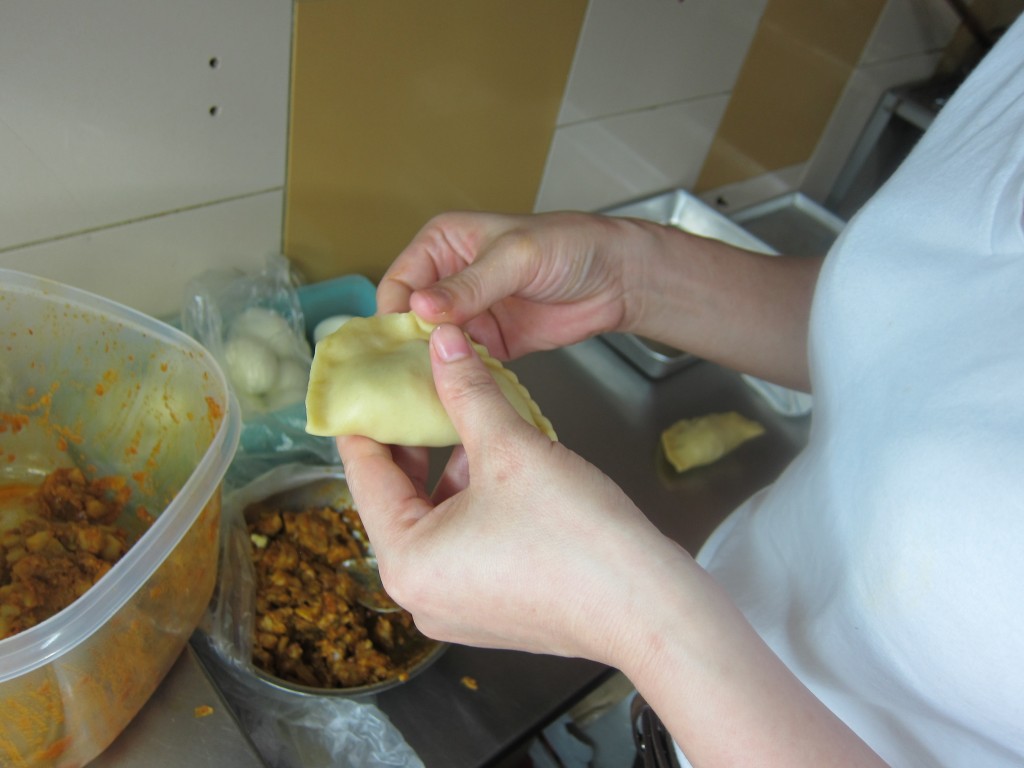 This all happened incredibly quickly. (It has to — this stall sells a few hundred of these a day.) Even so, each puff looked beautiful and perfectly shaped. 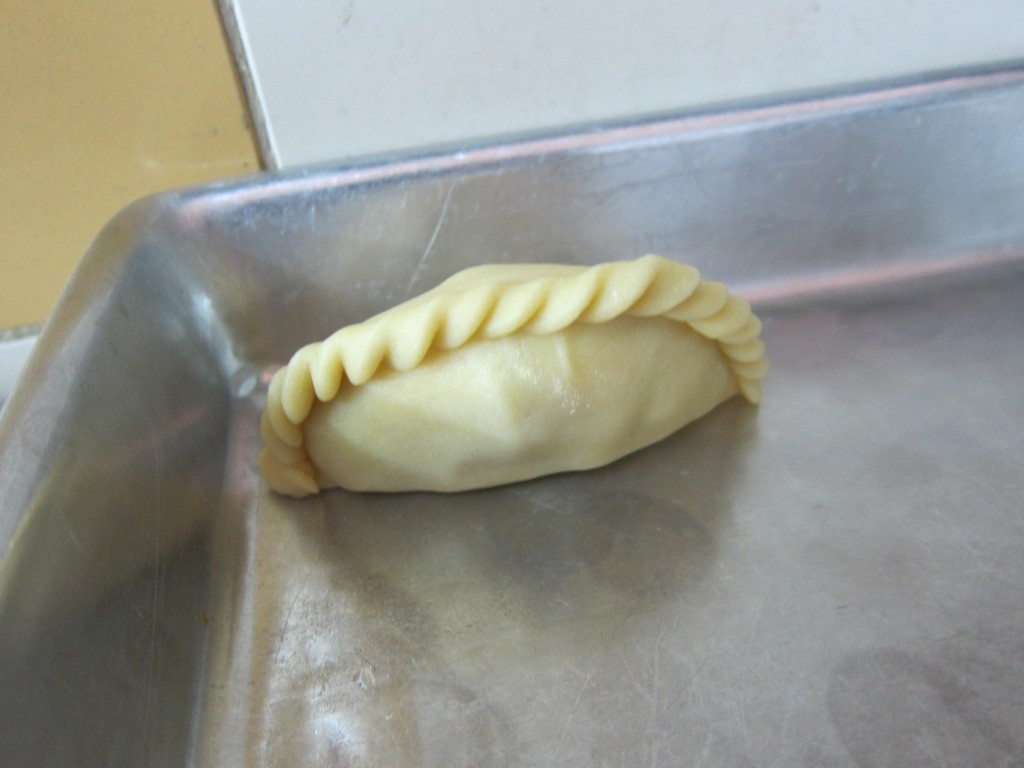 Next, into the fryer went the puffs … 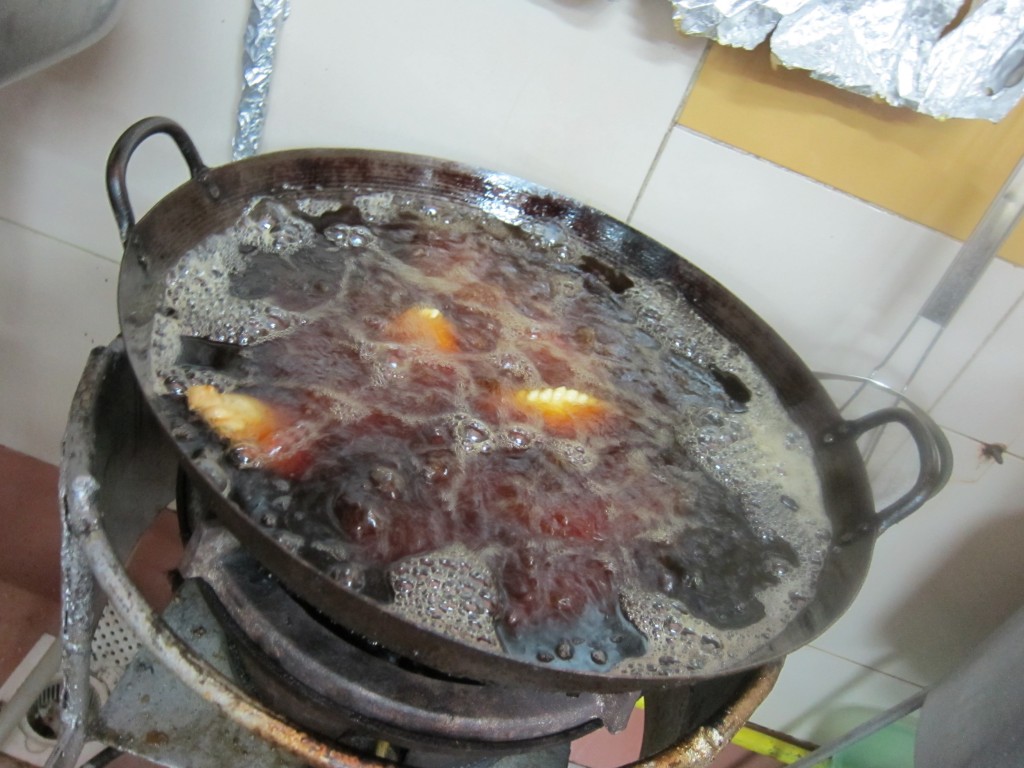 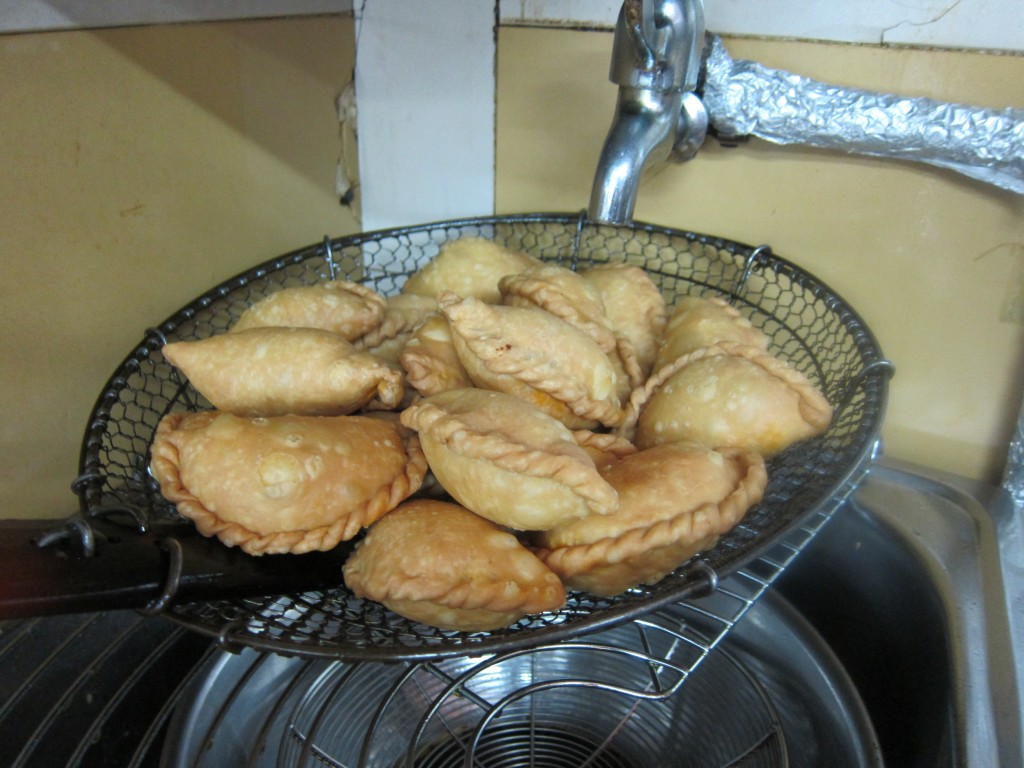 These puffs move quickly, especially once Mr. Tham’s team lines them up in the window of the tiny stall. 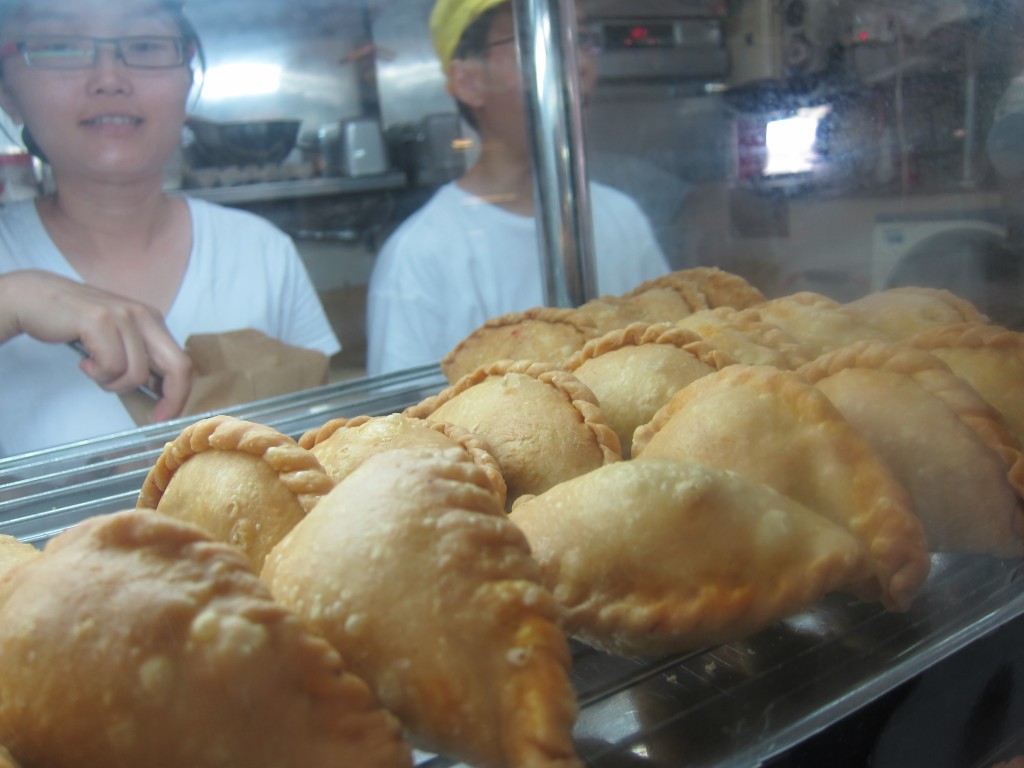 As curry puffs go, Rolina’s are a little mild — the curry is slightly sweet and not fiery at all. But the dough is lovely and crispy and each puff has just the right amount of filling, giving you a great combination of curried potatoes and crunchy pastry and a smidge of egg in each bite.

My one beef with the puffs was the sticker shock that came with them — at Singapore $1.20 (about U.S. $0.96) — these were far more expensive than the puffs of my youth. The times, they have changed, of course. But I take solace in the fact that Rolina’s curry puffs seem to remain the same.