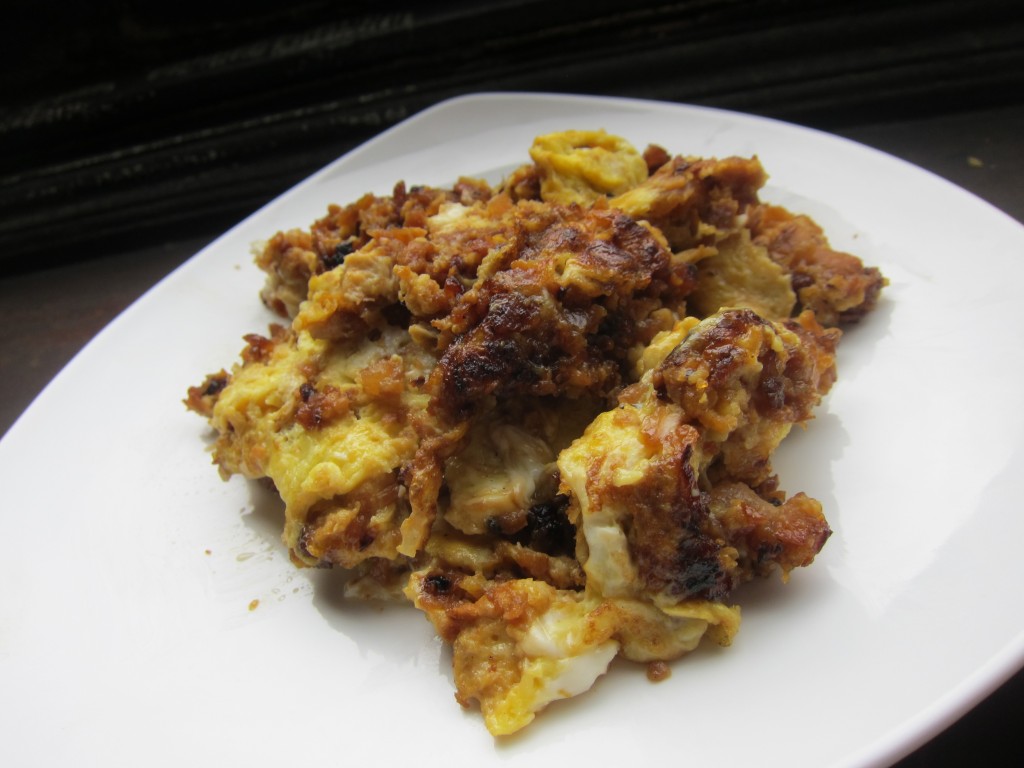 Breakfast in this household includes many of your standard brunchy dishes — eggs and bacon, egg-soaked casseroles, eggs a dozen ways and more.

What’s less typical is when I wake up craving Chinese porridge — and the eggy accoutrements that go with a hot bowl of the stuff that I get at my mother’s kitchen table in Singapore. The eggs she serves with porridge are large bowls of beaten eggs, steamed with minced pork and white pepper. Or, savory scrambles packed with ketchup, shallots and sometimes shrimp.

Of the egg dishes I love in Singapore — one remained untested in my own Brooklyn kitchen: Chai poh omelet, a scramble peppered with deliciously salty chunks of preserved radish.

The reason was simple — I’d simply never bought chai poh before. But when my chef friend Simpson recently gave me an extra packet he had in his larder, I decided to give it a shot. After all, Easter was around the corner and my Let’s Lunch bunch had decided to share egg dishes for April …

Now, if you’ve never heard of chai poh, much less seen it, it looks like this: 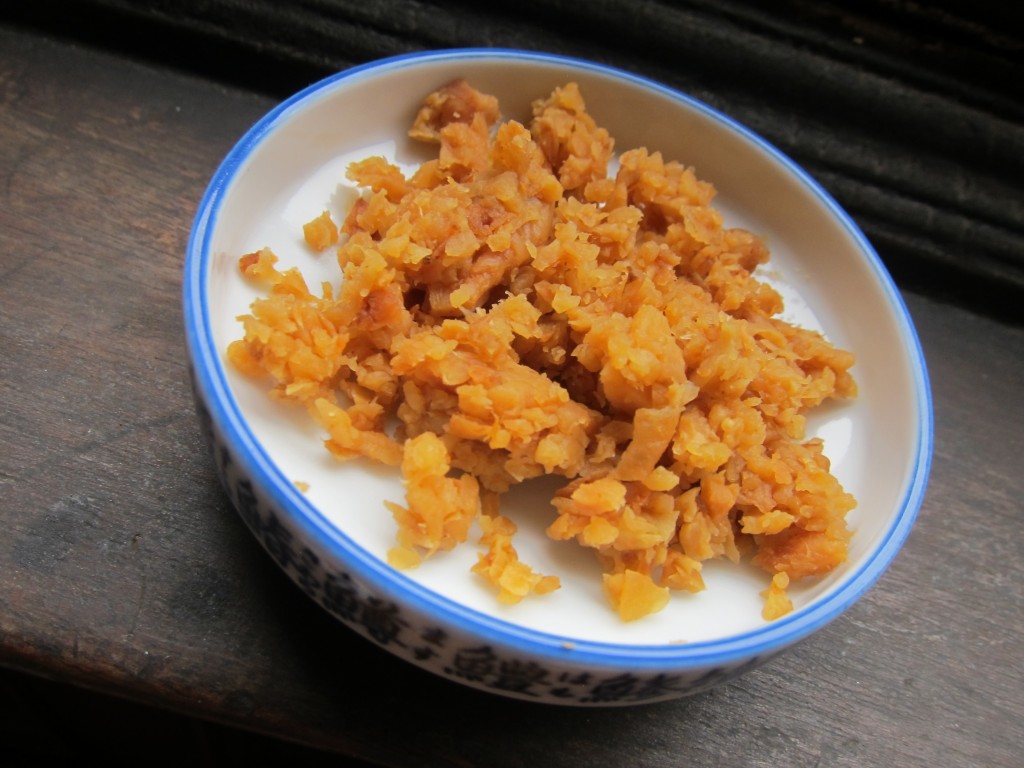 It’s usually sold in a clear packet — about the size of a 12 oz bag of chocolate chips — in Asian grocery stores. (Mine had Thai lettering on it — so, if you’re having problems finding it, look for a Thai grocery near you.)

The first chai poh omelet I made was simple — I simply stir-fried it in some vegetable oil until it was fragrant, then added beaten eggs to the mix. Very simple — and delicious.

But a recent craving for chwee kueh, a Singapore breakfast dish consisting of jelly-like steamed rice cakes topped with spicy preserved radishes, made me think — how much more amazing would a chai poh omelet be jazzed up with all the intense flavors of a chwee kueh topping?

A little research yielded a few recipes for chwee kueh toppings that looked fairly straightforward. One, by a homesick Singaporean in London, looked so tasty the screen had me salivating. So I took that, added minced shallots to the mix and used that for my chai poh omelet.

How was it? Mind-blowing, if I do say so myself. The salty, sweet and spicy mixture packed an intense burst of flavor in each bite — and was a lovely addition to plain porridge. And I adored the taste of it so much I immediately began plotting using the chai poh mixture with minced pork or chicken in stir-fries, paired with rice.

Is this your usual Easter brunch dish? Not in most households, probably. But after you’ve tasted this, perhaps you’ll agree that it should be.

– Emma‘s Eggs In A Hole at Dreaming of Pots & Pans

Beat eggs with milk in a medium bowl with a whisk until frothy. (Add a very small pinch of salt if you’d like. Not much more as the chai poh is very salty.) Mix together sugar, kecap manis. chili sauce and fish sauce in a small bowl and set aside.

Heat oil in wok over high heat. Once the oil is shimmering, add garlic and stir-fry very vigorously for about 30 seconds (until fragrant) then add shallots. Stir-fry until shallots have softened and mixture is fragrant. (Be careful not to burn the garlic.)

Add chai poh and mix well, stir-frying until the mixture looks a little drier, is fragrant and has turned a darker shade of brown. Then, add the sugar/kecap manis/fish sauce/chili sauce mixture to the wok and stir-fry, mixing well.

Once that is well mixed, reduce heat to medium and remove most of the mixture and set aside, leaving two to three tablespoons of it in the wok. (You can leave a larger amount of the mixture in the wok if you’d like — bear in mind that it’s rather salty so a little bit of it goes a long way.)

Pour beaten-egg mixture over the remaining chai poh mixture in the wok and let it set. After a little while, flip it over if you can. Or, you can cook this like a scramble. Once the eggs look cooked, serve immediately with porridge and chili sauce on the side, if desired.

Reserve the remaining chai poh mixture for other possible stir-fries.