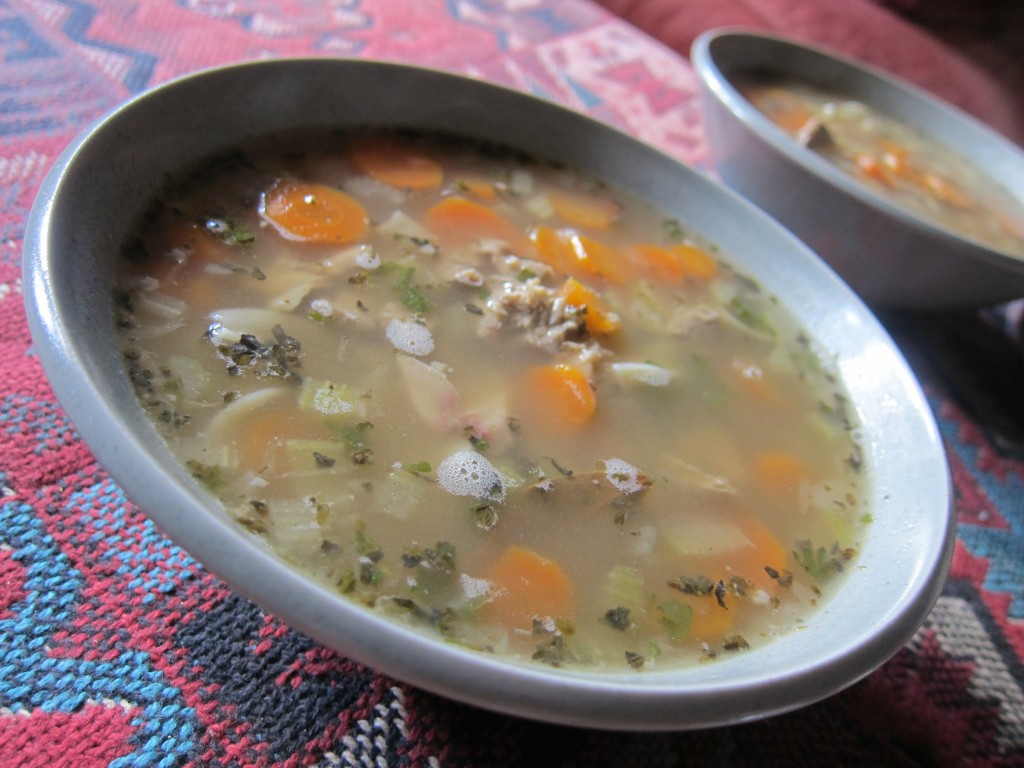 It is never fun when one’s sous chef falls ill.

The chopping, the peeling, the dicing — it becomes too clear how distant a memory all that had become when the sous chef suddenly is too sniffly to wield a knife and dinner is suddenly before you.

And so it was that I went on a soup-making binge recently. If that’s what it was going to take to get the assistant back in commission, then by god, pots of healing soups simply had to be made.

Of the soups that filled our apartment recently, one stuck out …

Now, the reason that I love this particular chicken noodle soup is not how tasty it is but rather, how simple the recipe is — it doesn’t involve any nonsense like boiling a carcass for hours in order to just make broth. (Not that I have anything against that — when I have time, and a carcass, this is perfectly acceptable behavior.)

This recipe is great for home cooks without much time — canned broth stands in for home-made broth and you don’t entirely notice the difference because the soup is packed with such flavor from the other ingredients. And you can pretty much toss in whatever root vegetables you have at home if you’re looking to clear your fridge. (In my case, I used the opportunity to take a good whack at the bag of leftover turkey from Christmas dinner.)

Despite its shortcuts, this soup proved to be a keeper. The giant pot I made disappeared quickly and the sous chef was soon on the mend. Good thing, too, as he seems to have passed his little cold along.

Should he feel moved to return the favor, however, here is the recipe …

(An AllRecipes.com recipe, with slight tweaks)

In a large pot over medium heat, melt butter. Cook onion, garlic and celery in butter until just tender, 5 minutes. Pour in chicken and vegetable broths and stir in chicken (or turkey), carrots, basil, oregano, salt and pepper. Bring to a boil, then reduce heat and simmer 20 minutes before serving. Add parsley toward the end and mix well.

In a separate pot, cook noodles, drain and set aside. Add noodles to the soup and serve.

One thought on “Easy Chicken Noodle Soup: A Speedy Remedy”