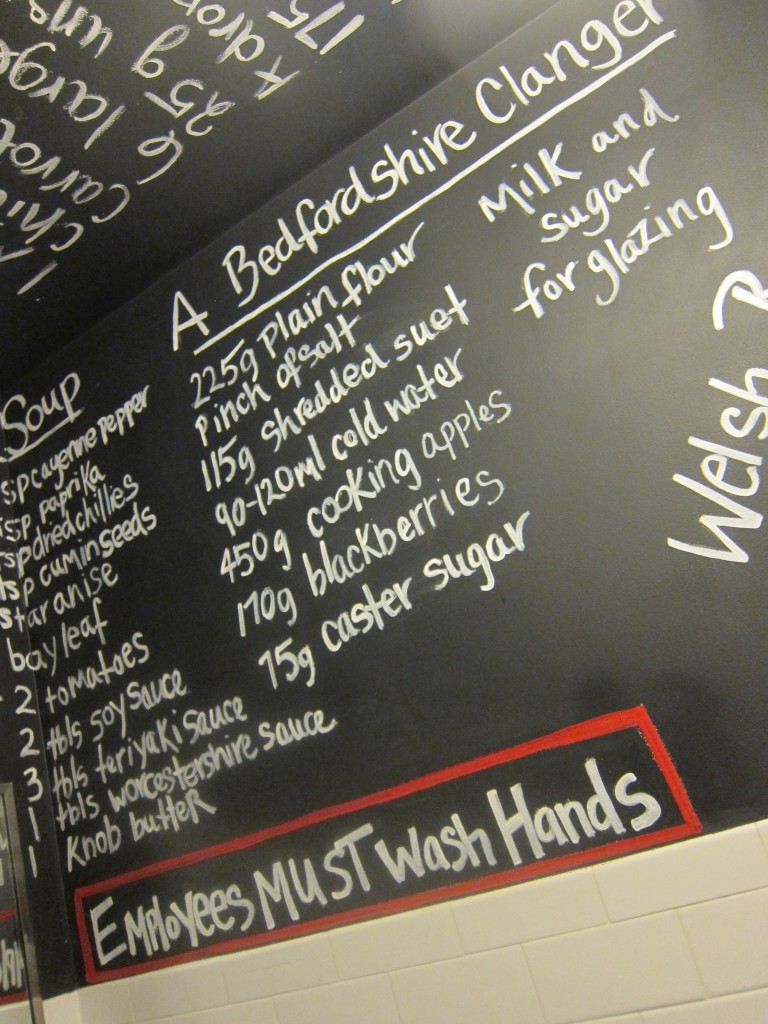 It has been said that I am something of an Anglophile.

Which is probably unsurprising given that I grew up in Singapore, a former British colony that still prizes its high teas and bangers and mash despite having developed its own formidable — and unique — cuisine in the centuries since the Brits first landed.

So when I was dragged to the new Jones Wood Foundry on the Upper East Side recently — a little reluctantly, I have to admit, given its distance from where I live — things started looked better the moment menus appeared. Haddock and chips, hearty pork pie, steak and kidney pie and, of course, bangers and mash — this gastropub had it all.

A round of drinks was immediately ordered. Dinner was suddenly in the cards … 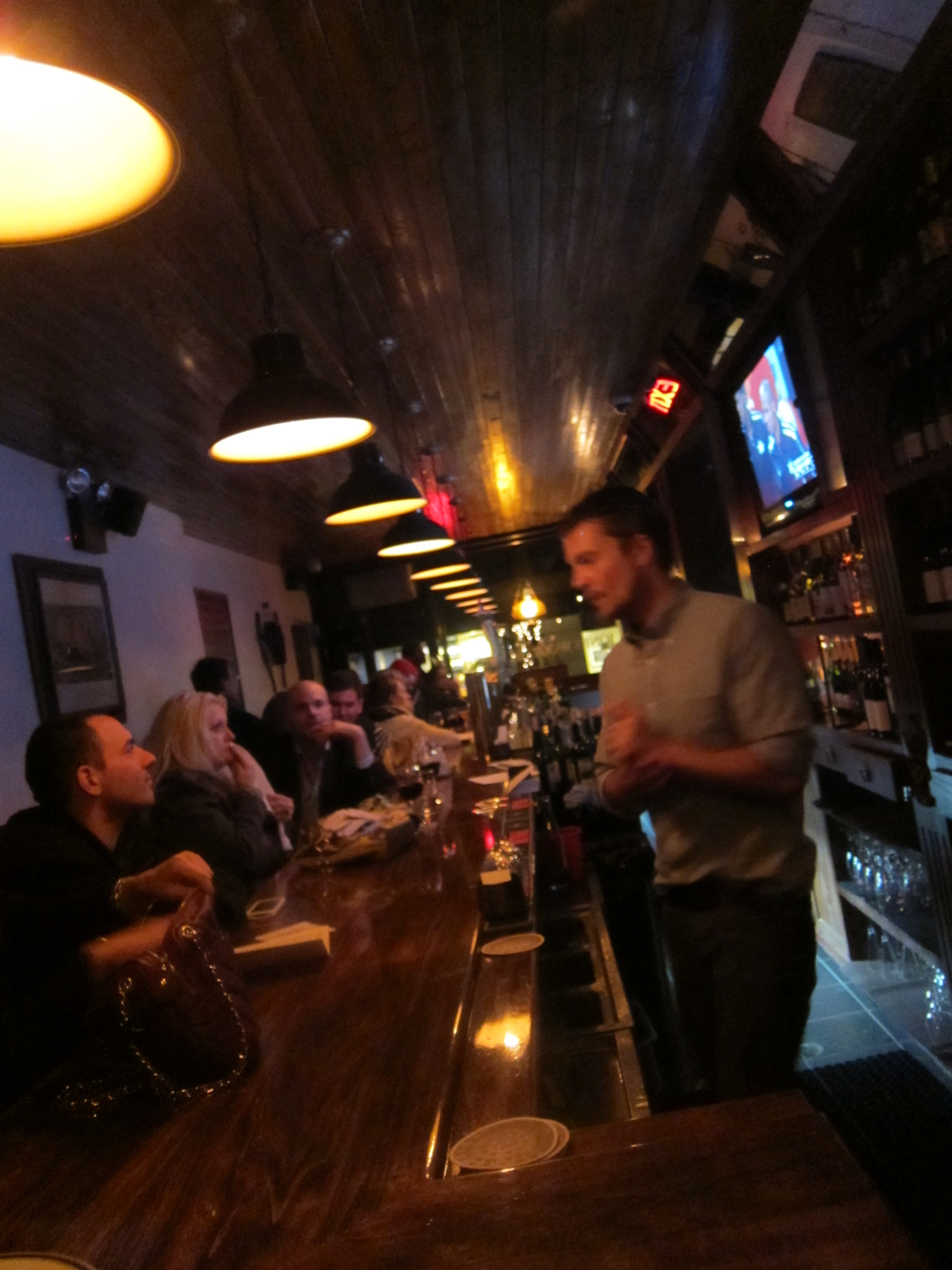 The small-town cosiness is further fleshed out in the dimly lit dining room in the back, too. 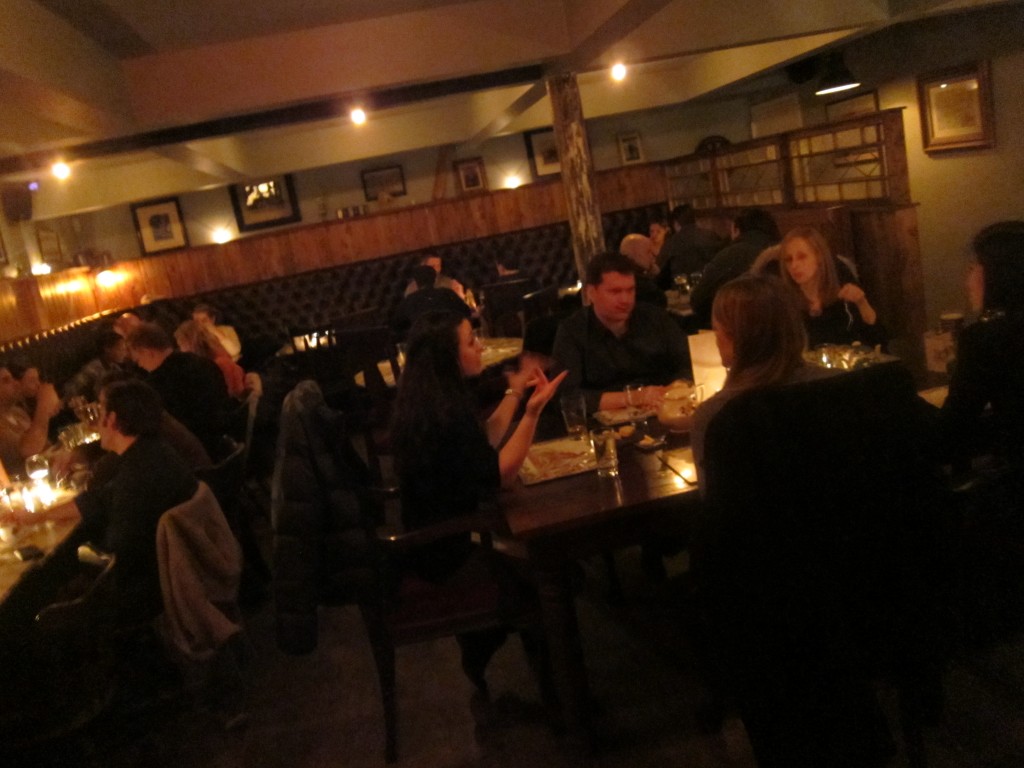 Before we get into the meal, I have to apologize for the ensuing photos. Stomachs were calling the moment these plates hit our table, resulting in very hastily snapped shots taken with an iPhone. (This is when photos were taken at all — there was, unfortunately, a lovely little pork pie starter that disappeared even before the thought to pull out a camera had time to formulate.)

But if you’ll bear with me, here goes.

The menu offers a nice range — from hearty celery root and chestnut soups ($7) and a $12 poached haddock and potato appetizer to $22 cod and chips and a $24 Lancashire hot pot featuring braised lamb shoulder with onions and potatoes.

We began by splitting the $11 pork pie, having not had a good one in far, far too long. The pie was disappointing on a few fronts, however — first, it was cold, the temperature of having just left a refrigerator seconds before, in fact. While I’m not wedded to the idea of hot pot pies, this was just a smidge too chilled for me. Second, I know size doesn’t matter but for $11, I was expecting something slightly larger than something that could be consumed in just a few bites.

Also, I’ve seen these four-bite pork pies in Myers of Keswick, the famed British provision shop that makes lovely pies and bangers in the West Village — and those pies cost far less than $11. 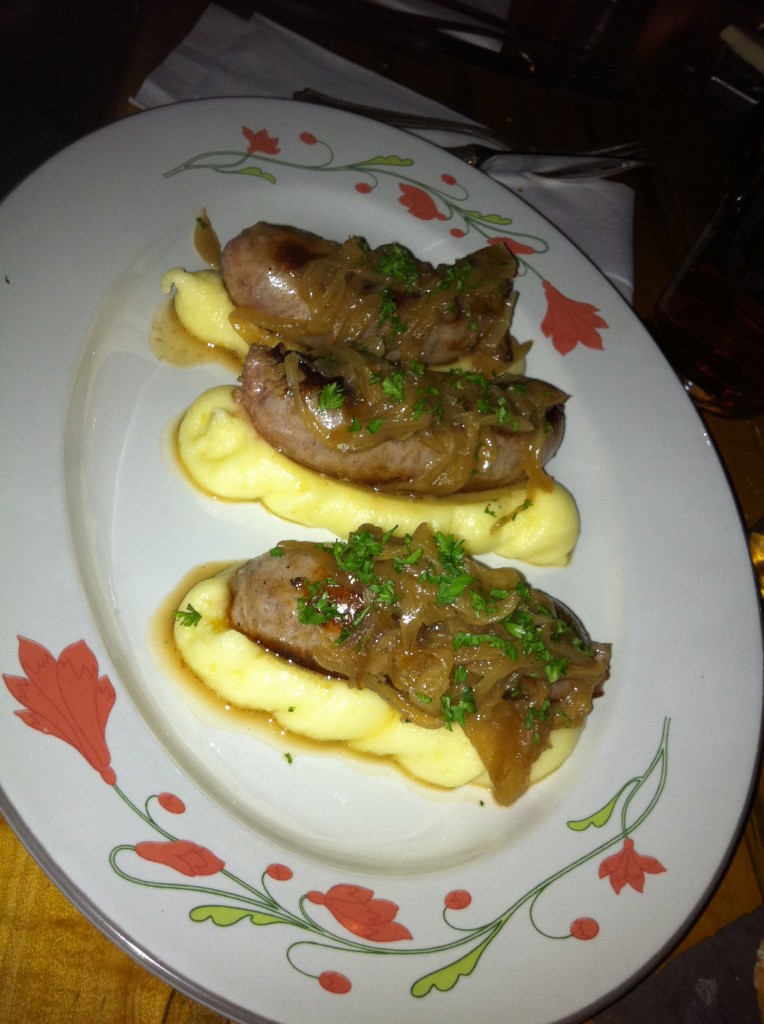 There were no size complaints with the stilton burger and chips ($18) — with the chips being big and fat, British-style. The cheese was plentiful, the burger was massive. We had no quibbles with the taste either. 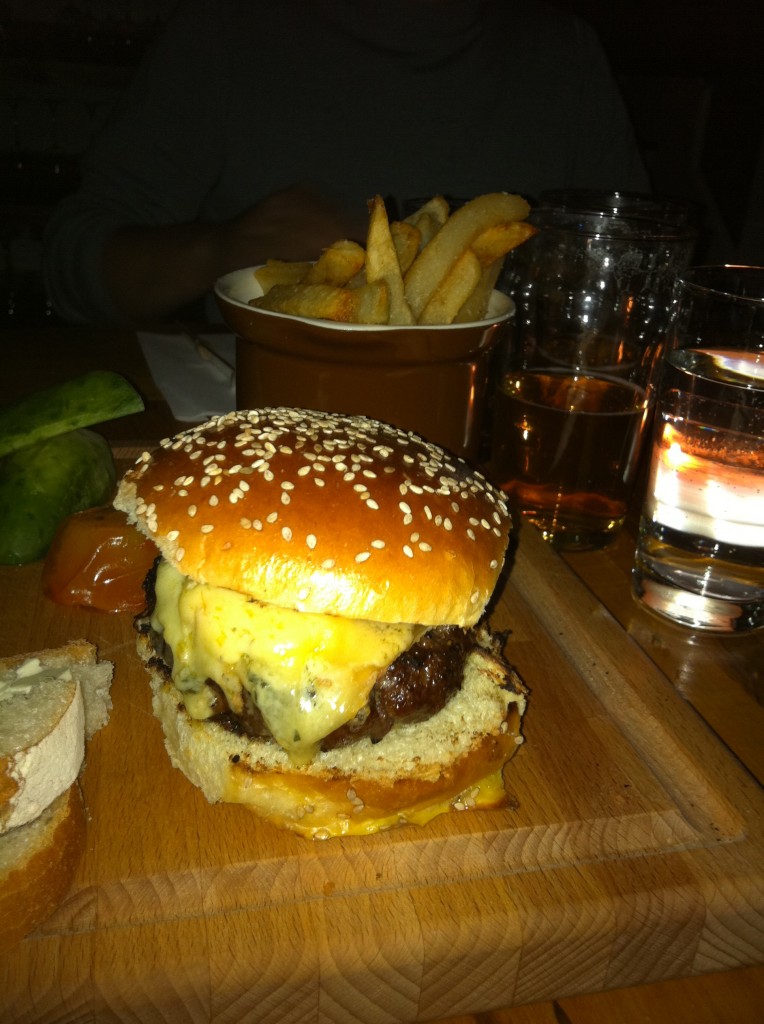 The chicken and mushroom pie ($18) — which also came with chips — was a little more ordinary but not any less comforting. The filling was flavorful and the crust, just flaky enough. It was a lovely panacea for a chilly winter day. 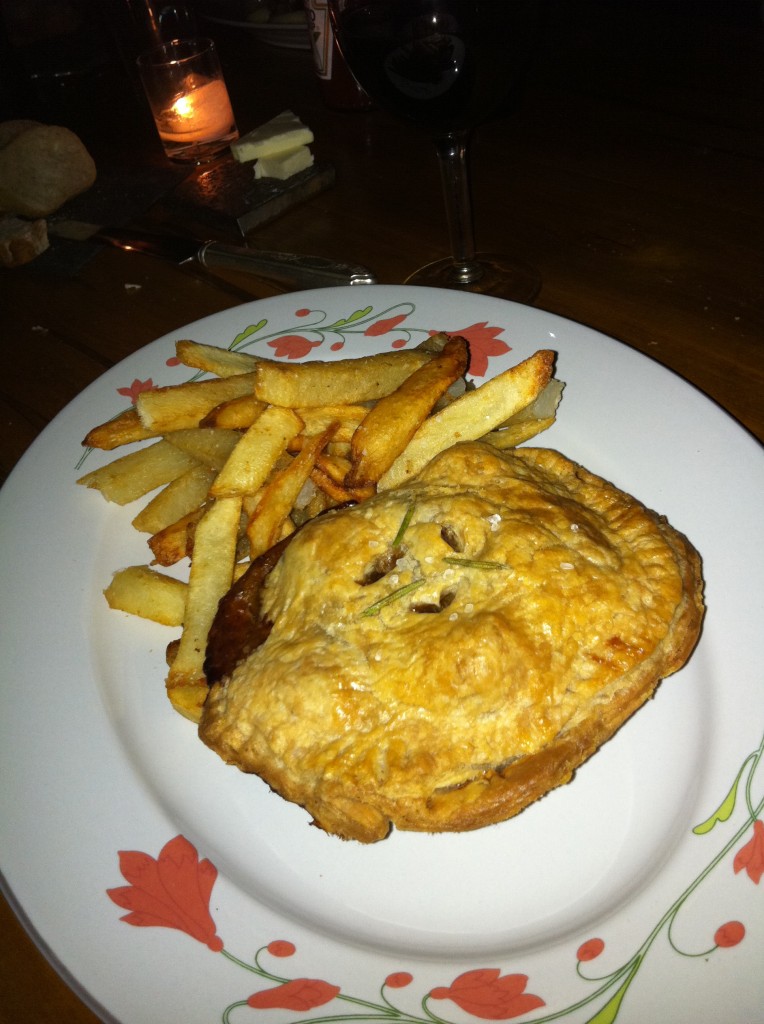 On the way to the bathroom, which features walls plastered with detailed recipes for British classics such as toad in the hole along with mincemeat donuts, a Victoria sponge is spied. (This sponge cake filled with a thick layer of whipped cream and/or jam was named for Queen Victoria, who loved a good slice of it with her afternoon tea.) 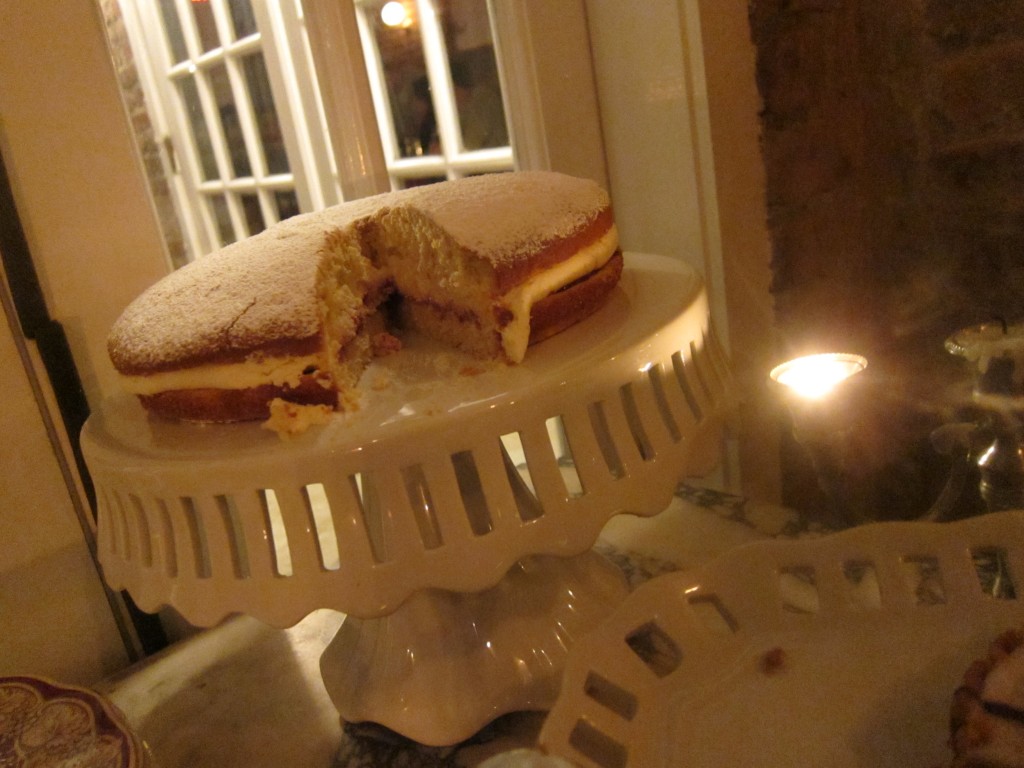 At this point, sadly, there simply isn’t any more room. The meal has been worth the trek, however. We decide that perhaps this sponge is worth coming back for.