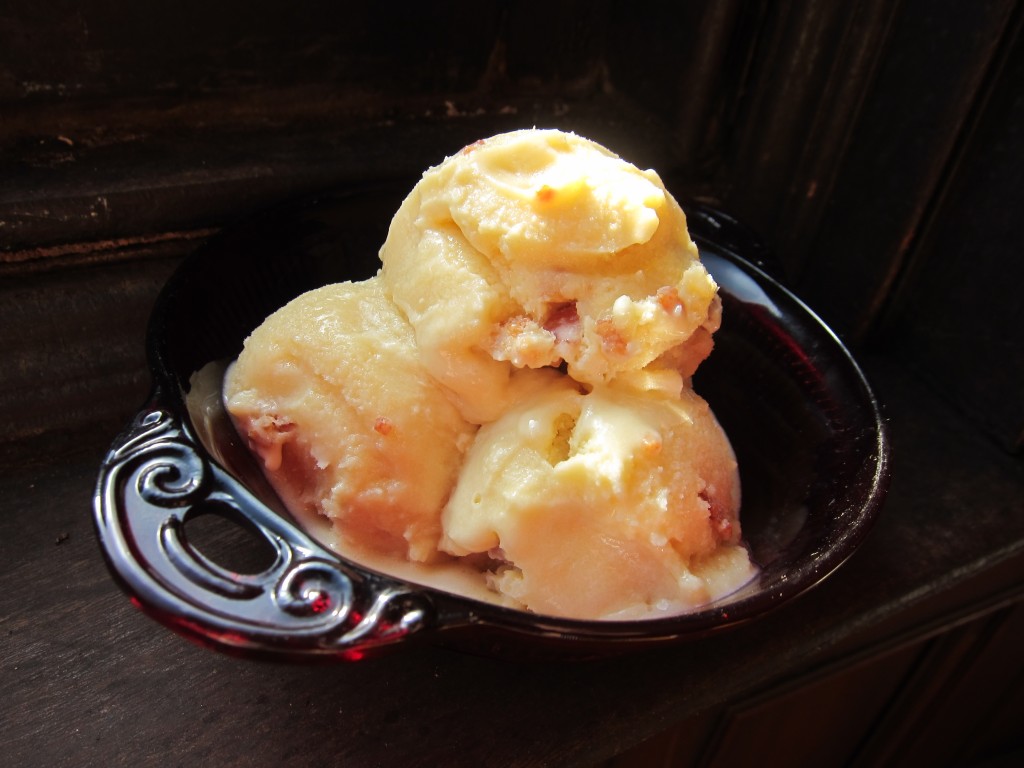 This is what happens when a girl’s doctor discovers what she sort of does for a living (eat) and starts worrying about her cholesterol and blood pressure:

She comes upon a recipe for maple-bacon ice-cream calling for 12 large egg yolks.

And gosh darn it, she makes it.

One might speculate that there are many reasons for this occurrence — a deep-seated stubbornness, a misguided rebellion, a determination to cling to the belief of invincibility, the attempt to give the specter of death the big, well, you know.

But perhaps the reason is far, far simpler. (This is what she chooses to believe.) This ice-cream has bacon in it. Who wouldn’t want to try making it?

And so the eggs are bought, and the bacon. And it doesn’t stop there. Out comes the heavy whipping cream, whole milk — four entire cups — and a whopping 2.5 cups of maple syrup.

Assembled on the kitchen counter, the sheer excess of these ingredients put together is a little nauseating. But as much denial as there is, this ice-cream quest has already taken on a some meaning of sorts. Besting death is no small matter. The process must begin.

First, the bacon is minced and fried to a crisp. 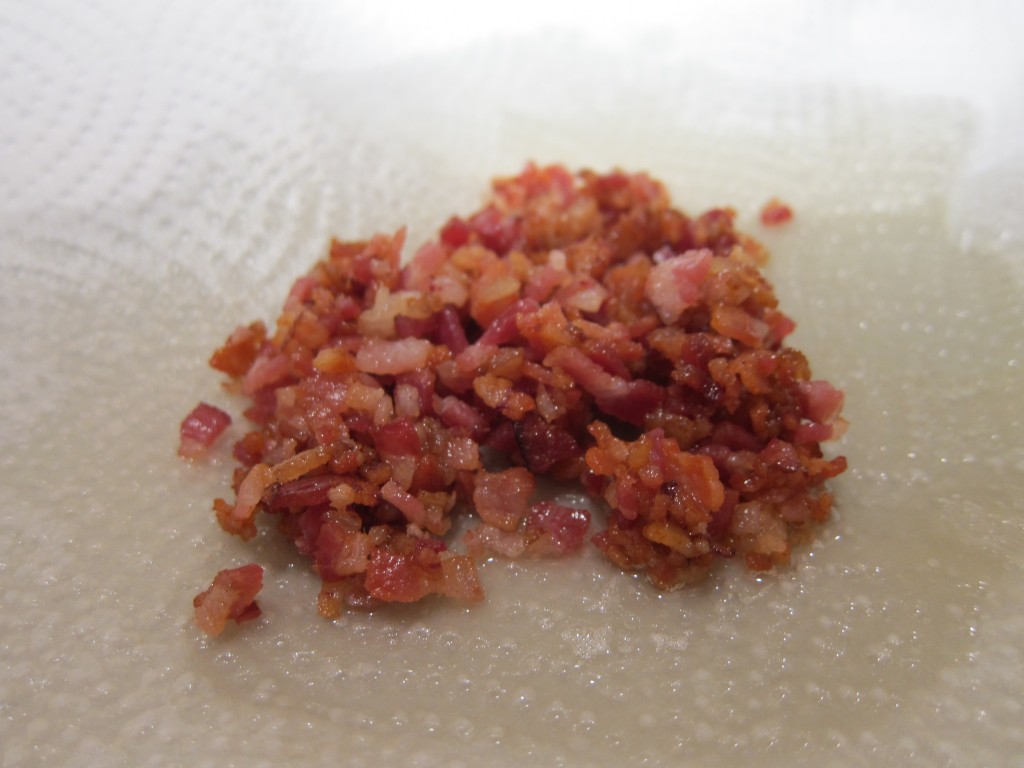 Then the whole milk, dried milk and heavy cream are combined, then mixed with sugar and the 12 large yolks. The concoction has the thickness of glue and smells almost as sickeningly sweet once you mix in the insane amount of maple syrup listed.

By the time the bacon goes in, there starts to be a feeling that perhaps you’ve been wrong — you’re not snubbing death. This right here is death snickering at you. 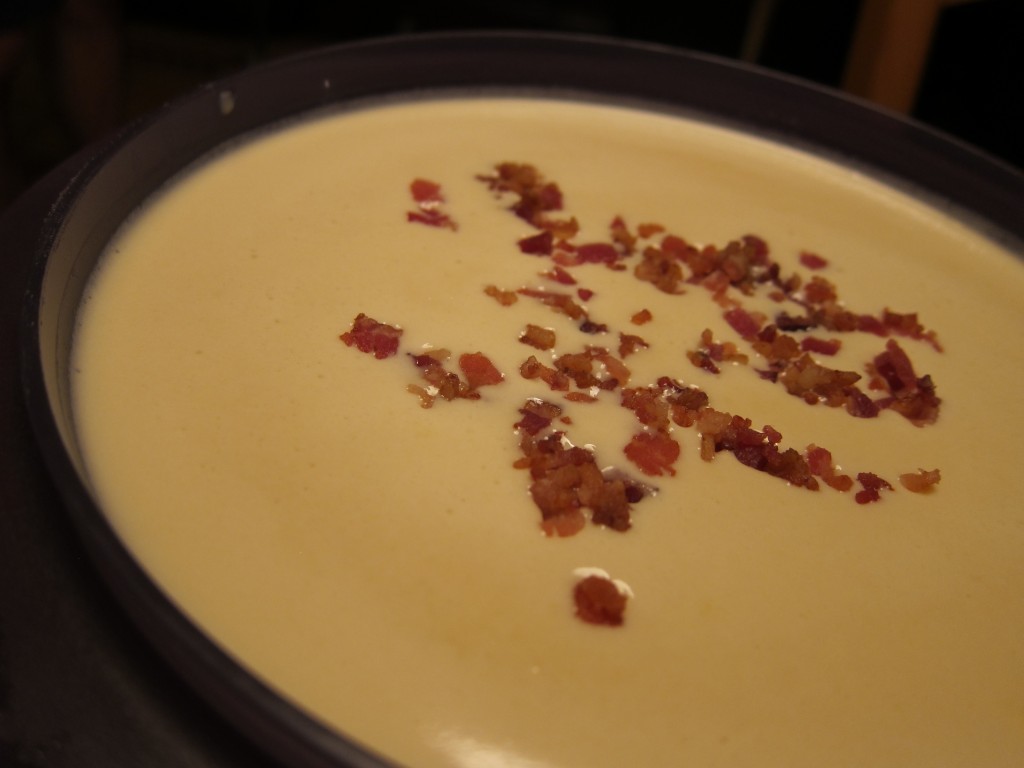 But the mixture has been made and into the ice-cream mixer it has to go. And the outcome, well, is delicious. How could it not be?

Now, you have to have an intense love for sugar in order to like this — if you’re expecting more of a balance between sweet and salty, then make sure you add more bacon. (That great smoky flavor of fried bacon can get a little lost in the massive amount of maple syrup in which you’ve drowned it.)

After one scoop, and a second, however, it’s hard not to feel nervous.

Is your heart racing faster? Why are you sweating? You know you’re imagining that tug at your chest. Nothing could possibly be coming on this quickly after just a little bit of ice-cream. (Even if it is less than a quart of ice-cream made with 12 yolks, 2.5 cups of maple syrup, heavy cream and four cups of whole milk.)

As delicious as the ice-cream is, it is immediately packed up and put away. Not another bite of it is eaten. And that’s alright, really.

The euphoria of defiance has been indulgence enough.

Recipe by Chef Cory Barrett of Lola in Cleveland, Ohio; from “I Love Bacon!”

Cook bacon pieces in skillet over medium heat until crispy. Drain and cool on paper towels.

Fill a large bowl halfway with ice and water and set it aside.

Combine the whole milk, dry milk and cream in a large saucepan and bring to a boil over medium heat. Remove from heat and set aside. Combine sugar and egg yolks in a large bowl and mix well. Slowly add the hot cream to this mixture in small portions to temper it, stirring constantly and making sure not to scramble the eggs.

Return the mixture to the saucepan and cook over medium heat, stirring constantly until the mixture is thick enough to coat the back of a wooden spoon. Remove the pan from the heat and chill if over the ice water bath for about 30 minutes. Once cooled, stir in the maple syrup.

Pour the mixture into an ice-cream maker and churn according to the manufacturer’s instructions. When the ice-cream is fully churned, scoop it into a freezer-safe container and stir in the bacon pieces. Freeze until ready to serve.